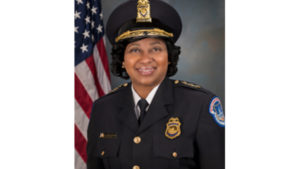 The Pro-Trump riot that took place at the U.S. Capitol last week caught many people off guard, specifically the United States Capitol Police. Due to the ineffectiveness of the police force when the rioters stormed the Capitol, calls for the resignation of Police Chief Steven Sund began immediately. Sund then announced that he will leave the position effective January 16.

On January 8, according to the United States Capitol Police (USCP), Yogananda D. Pittman was appointed acting chief of police. This makes her the first woman and first African American to hold the post of leading the USCP.

According to the USCP website, “The Chief of Police is responsible for administering the Department in accordance with applicable laws and regulations, and ensuring that organizational objectives are met. The Chief reports directly to the Capitol Police Board and is assisted in the management of the Department by the Assistant Chiefs of Police and the Chief Administrative Officer. These leaders collectively are recognized as the United States Capitol Police Executive Team, the highest-level management team within the Department.”

“In the wake of this past week’s horrendous and thwarted attack on the U.S. Capitol, I am pleased to announce that a decision was made to elevate distinguished and decorated Morgan alumna Yogananda D. Pittman to serve in the role as acting chief of the U.S. Capitol Police (USCP). This appointment is notable for our nation and our University, as she will be the first woman and first African American to hold the post of leading the USCP. We commend this wise decision as it is widely known that Morgan graduates are purposefully prepared to not only Grow the Future, but to Lead the World.”