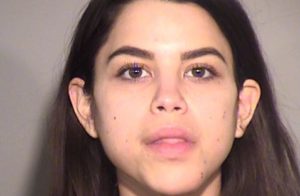 An arrest has finally been made! The white woman who falsely accused the 14-year-old son of a Jazz musician of stealing her iPhone at a SoHo hotel has been detained and arrested for the assault that was captured on video surveillance tape at the Arlo Hotel in New York. She has been identified as Miya Ponsetto.

This arrest brings us one step closer to living in a world where a 14-year-old Black child can enjoy brunch with his father w/out the threat of being profiled, falsely accused, & physically attacked — in this case, enabled by the staff of the Arlo Hotel. https://t.co/4UIXcBMaDN

The lawyer for the family of Keyon Harrold Jr. released a statement on the arrest.

“This is not about an apology from someone who until a few days ago was claiming she did nothing wrong, and in fact alleged Keyon Harrold Sr. had assaulted her. Someone who targeted a 14-year-old Black child because of the color of his skin. What it is about is significant, societal change. It’s about a system that condones and emboldens racial profiling and considers Black people guilty until proven innocent,” the statement reads. “A system that exists and thrives because of institutions like the Arlo Hotel who enables the disturbing behavior of people like Miya Ponsetto, and instead of stopping the racist attack on our son, threw gasoline on the fire.”

My full statement on Miya Ponsetto, whose act of racism was enabled by the staff of the Arlo Hotel, which threw gasoline on the fire instead of stopping a racist attack on their own guests. pic.twitter.com/Jx9X7OWIo5

According to NBC New York, Ponsetto was arrested and placed into custody Thursday evening by Ventura County Sheriff deputies. A spokesperson for Ventura County Sheriff says Ponsetto was approached at a traffic stop but refused to stop until she reached her home. She was reported to be uncooperative, while resisting arrest, she refused to get out of the car and tried to slam the car door on one of the deputies. She had to be forcibly removed from the vehicle.