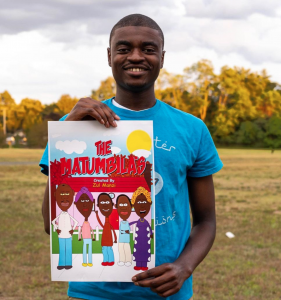 Zul Manzi loved creating content online. In 2019, he started production for an animated series called The Matumbila’s following a middle-class Tanzanian family with first-generation children living in the U.S. The Massachusetts native released a trailer for the upcoming season back in September of last year that garnered attention online.

Lil Rel Howery, who became head of comedy at kweli TV, shared that the show was acquired by the streaming platform on his Twitter page in December. Howery and Manzi spoke to each other on IG Live about the project and working together to bring the animated series to the platform and the importance of representation of an African family and first-generation kids living in the United States.

“With a lot of immigrant stories coming to play on television, I believe the Matumbila’s have a different, unique twist but also gives us a different new perspective of who Africans are,” said Manzi in the video. “This gives a lot of more authentic visualization of how African people [and Tanzanian people] really are.”

Excited to introduce you to this hilarious animated series premiering on KweliTv tomorrow check out the trailer. #TheMatumbilas #KweliTv pic.twitter.com/HTKBL6XQcS

Recently, Manzi took to his Instagram page to deliver a personal thank you to all of his supporters for bringing the project to life and when viewers can expect to see new episodes from the series.

“I wanted to personally thank you so much for the genuine support that you all given The Matumbila’s,” he said in the video, revealing that the series had become one of the top 15 most-watched shows and movies streaming on the platform. “I also want to say thank you for the genuine shares, likes, comments, as well as personal messages regarding the Matumbila’s you have given to me.”