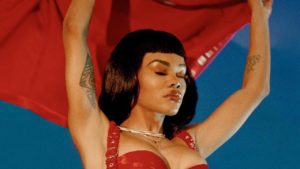 R&B singer Teyana Taylor announced on Instagram that she is “retiring this chapter of my story” in an apparent reference to her recording career.

The singer/songwriter, who also works as a model, actress, dancer, choreographer and director, expressed her disappointment with the industry due to the lack of push she receives when it comes to the promotion of her projects over the years. Although she has announced a retirement, she also alluded that she may appear elsewhere doing something else.

“Wow, who did that? Y’all did that! 🥺Thank you 💗 I ain’t gone front in times of feeling super under appreciated as a artist, receiving little to no real push from the “machine”, constantly getting the shorter end of the stick, being overlooked, I mean the list on and on lol.. I’m retiring this chapter of my story with the comfort that i can depart with peace of mind seeing that all the hard work & passion put in was indeed loved & supported somewhere in the world! To all my supporters from day 1 & all my new ones I love you and I thank you for everything & don’t worry y’all know 🤎 all hustlers have the understanding that when one door closes another will open…either that or I’m pickin da locks petunia!!! So wassup😜🤎😘”

In an Instagram video clip that appears on TrueExclusives, she elaborates more on her “retiring,” saying that it was more so directed towards her record label.

“The majority of what that post was to warn my label, who I’ve been signed to for almost 10 years. Everything that you guys see of me, everything that I put out, everything that I do is 100% me,” said Taylor, who got her first taste of fame back in 2005 when she appeared on MTV’s My Super Sweet 16.