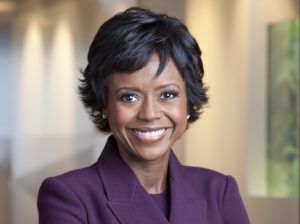 Previously, BLACK ENTERPRISE reported that Princeton University established a residential college to be named after renowned business leader Mellody Hobson. This week, Hobson made news again when coffee giant Starbucks announced that she will join their ranks as the Non-Executive Chair of the Board.

Hobson has been working with Starbucks as an independent director since 2005 and later became the board’s independent vice-chair in 2018. She succeed Myron E. Ullman, who will be retiring from the board in March 2021 when Hobson will officially start her new role.

“It has been remarkable to be a part of the Starbucks board for nearly 18 years as this enduring company has grown with a mindset of prioritizing its people and its customers,” said Ullman in a statement on the company website. “It also has been an honor to serve as the chair of the Starbucks board and to support and oversee the relationships of trust built with our stakeholders. With its Mission and Values as its guide, I am confident in the future of the company.”

Outside of her corporate role, Hobson is also the co-CEO of Ariel Investments, LLC, a global value-based asset management firm and has worked with other major corporations, including Dreamworks Animation along with Estee Lauder. “I am thrilled and honored to take on the role of chair,” said Hobson in the press release.

“Over nearly two decades, I have seen the company continue to elevate and transform its business – adapting to various market environments and evolving consumer trends. I look forward to working with the board and talented leadership team on accelerating our strategy, supporting our valued partners, and continuing to create significant value for all of our stakeholders.” Hobson continued, “On behalf of the board, I would also like to thank Mike for his strong leadership, and all of his invaluable contributions.