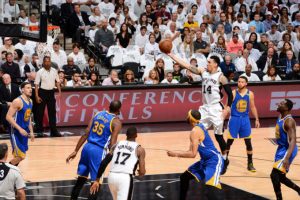 The newly formed NBA Foundation has committed a total of $2 million in inaugural grants that will drive economic empowerment in Black communities through employment and career advancement.

Seven organizations that will benefit from the initial efforts include exalt, Management Leadership for Tomorrow, Marcus Graham Project, Operation DREAM, TEAM Inc., The Knowledge House, and the Youth Empowerment Project.

“The organizations selected align with the NBA Foundation’s mission to provide skills training, mentorship, coaching, and pipeline development for high school, college-aged, job-ready, and mid-career Black men and women in communities across the United States and Canada. The inaugural grants will try to increase education and employment access in Black communities,” the NBA said in a statement.

In other news, the NBA Foundation Board of Directors has selected Greg Taylor as its first executive director. Taylor, currently NBA’s senior vice president of player development, starts his new role on January 4. He is expected to lead the Foundation’s mission to drive economic empowerment for Black communities through employment and career advancement.

“As a proud member of the NBA family, I am honored to be selected to lead the NBA Foundation in its development,” said Taylor in a written statement. “During my time at the league, I have been inspired by the efforts of NBA players, teams, and governors to advocate for change and I look forward to using my experience working with non-profits to further our investment in the next generation of Black leaders.”

“We are thrilled to name Greg as our first executive director, a professional with extensive philanthropic experience and firsthand knowledge of the values central to our league,” said Mark Tatum, NBA Foundation president. “The Board sees this as an opportunity to continue to build momentum in creating meaningful opportunities and sustained change in the Black community, and we look forward to Greg’s leadership as the Foundation grows.”