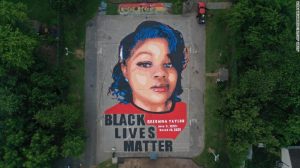 The Louisville Metro Police Department has informed two of the officers involved in the Breonna Taylor shooting that they will be fired.

Detective Joshua Jaynes and Officer Myles Cosgrove were notified of their pending termination on Dec. 29, according to ABC News. Both officers will answer the termination letters on Dec. 31 in a hearing before Police Chief Yvette Gentry, who has served in the role since September.

Both men can appeal their terminations, but it is unclear if they will. Jaynes’s lawyer, Thomas Clay, told ABC his client plans to attend the meeting Thursday, but he expects “Mr. Jaynes will be terminated after the ‘hearing’ no matter what the evidence is to the contrary.”

Clay added they will appeal any disciplinary action taken against Jaynes, who was not at the incident but asked for the court to grant the warrant, saying police learned from a postal inspector that Taylor’s ex-boyfriend received packages at her home. However, during the investigation after Taylor’s death, Jaynes acknowledged he did not verify the suspect was receiving packages from Taylor’s home.

In the pre-termination letter sent to Jaynes, Gentry wrote “These are extreme violations of our policies, which endangered others,” according to the New York Times.

Officer Brett Hanikson, who was fired in June, was the only officer charged in the incident. Sgt. Johnathan Mattingly, who was shot in the leg during the incident, has not been terminated by the department.

Taylor and her boyfriend, Kenneth Walker, were asleep the night of March 13, when Louisville Metro Police barged into her home with a no-knock warrant in relation to a drug investigation. Walker, who is a registered gun owner, fired a shot toward their bedroom door.

The police responded, firing a bevy of shots toward the couple and hitting Taylor five times. Ballistics matched the fatal shot to Cosgrove. Taylor’s death and Floyd’s death sparked a summer of national and worldwide protests that led to several states defunding police department budgets and reforms including the release of police disciplinary records and many large police departments to ban chokeholds.