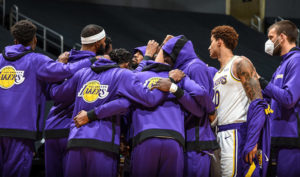 It’s been an annual tradition for sports teams, after winning their championship, to take a victory lap to the White House. After the divisive Republican President Donald Trump took office, most teams in various sports declined the invitation to meet and greet the president. But that may be changing with President-elect Joe Biden, who is slated to be sworn in on January 20th.

According to Yahoo! Sports, that yearly tradition may be back on track with the NBA champions Los Angeles Lakers ready to make the celebratory excursion back to the Oval Office.

There has been no NBA team that has taken that trip to visit the White House during the four years of the Trump administration. The last NBA championship team to make that White House visit was the team led by the current NBA Finals MVP, LeBron James, when his hometown team, the Cleveland Cavaliers, met face-to-face with President Barack Obama back on Nov. 10, 2016.

With the impending inauguration of Biden taking place on January 20th, the Los Angeles Lakers are looking to reinstate the tradition of going to the White House. Depending on the schedule of the next president and the team’s traveling arrangements, plus the ongoing coronavirus pandemic, the Lakers are hoping that they will be able to visit the White House when they play the Washington Wizards while in the District of Columbia.

The NBA schedule for the second half of the season hasn’t been released yet but the Lakers are tentatively scheduled to meet the Wizards sometime after the last scheduled release date of March 4th.