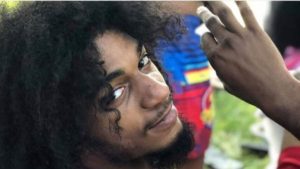 A 23-year-old Black man was killed by a sheriff’s deputy in Columbus, Ohio, last week. According to USA Today, Casey Goodson Jr. died after being shot “multiple times in the torso,” and his death was ruled a homicide by a coroner in Ohio on Wednesday.

USA Today had reported that his family members and community activists had stated that Goodson was on his way back home carrying a Subway sandwich when he was fatally shot in the back three times by a Franklin County Sheriff’s office SWAT deputy.

The sheriff’s office has publicly identified the Franklin County SWAT deputy as Jason Meade, who is a 17-year veteran. Meade is awaiting an interview by the Columbus Division of Police Critical Incident and Response Team, which is investigating the incident.

There are also inaccurate statements circulating that add to the pain and confusion of an already tragic situation.

Here are the facts as of today.👇 pic.twitter.com/knRg43pjRn

Ohio Democratic Senator Sherrod Brown made a statement via Twitter.

Casey Goodson Jr. is yet another young Black man who should be alive today. Our hearts break for another family who has lost a son at the hands of the police.

I join the Columbus NAACP & Mr. Goodson’s family in calling for a full investigation of this tragedy. #JusticeForCasey pic.twitter.com/2nxA92REwh

The U.S. Attorney’s Office in the Southern District of Ohio has stated it has started an investigation.

“United States Attorney David M. DeVillers announced today the U.S. Attorney’s Office — in coordination with the Civil Rights Division of the Department of Justice, the Cincinnati Division of the FBI, and the Columbus Division of Police — will review the facts and circumstances surrounding the Dec. 4, 2020, shooting of Casey Goodson and take appropriate action if the evidence indicates any federal civil rights laws were violated.”