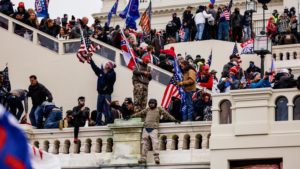 With the deadly riot that took place Wednesday in the nation’s capital, the union that supports flight attendants is concerned about those same rioters being allowed on flights and endangering the people onboard the planes.

The Association of Flight Attendants-CWA (AFA) has released a statement regarding the behavior and antics of Trump supporters who are already responsible for causing several deaths within the past few days. International President Sara Nelson, who represents as many as 50,000 flight attendants at 17 airlines, had this to say:

“Air travel is safe because everyone follows a strict set of rules, based on the spirit that ‘we’re all in this together.’ The mob mentality behavior that took place on several flights to the D.C. area yesterday was unacceptable and threatened the safety and security of every single person on board. It will not happen again. There’s a reason that there are strict penalties and fines for failing to comply with crew member instructions. Enforcement keeps everyone safe.

“Our first priority in aviation safety and security is to keep any problems on the ground. Some of the people who traveled in our planes yesterday participated in the insurrection at the Capitol today. Their violent and seditious actions at the Capitol today create further concern about their departure from the DC area. Acts against our democracy, our government, and the freedom we claim as Americans must disqualify these individuals from the freedom of flight.

“We in aviation have a serious role to play in national security. Airlines, in coordination with TSA, DHS, FAA, DOT, and law enforcement, must take all steps to ensure the safety and security of passengers and crew by keeping all problems on the ground.”

There have also been calls for the removal of President Donald Trump after he instigated the riot that took place Wednesday at the U.S. Capitol.