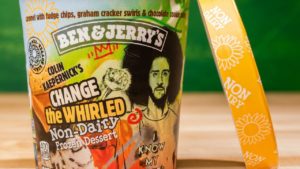 Ben & Jerry’s has announced that former NFL player and social activist Kaepernick is being honored with his own flavor of Ben & Jerry’s ice cream named “Change the Whirled.”

This new flavor helps celebrate Kaepernick’s much-needed work to take on systemic oppression and to stop the police violence used against Black and brown people. Ben & Jerry’s believes that the former NFL quarterback represents the very best of us who is willing to use his power and platform in the pursuit of equity and justice rooted in a commitment to love and resistance.

“I’m honored to partner with Ben & Jerry’s on Change the Whirled,” said Kaepernick in a written statement. “Their commitment to challenging the anti-Black roots of policing in the United States demonstrates a material concern for the well-being of Black and brown communities. My hope is that this partnership will amplify calls to defund and abolish the police and to invest in futures that can make us safer, healthier, and truly free.”

A portion of the proceeds from the new flavor “Change the Whirled” will go towards supporting the work of Know Your Rights Camp, the organization that Kaepernick founded in Oakland, Calif., in 2016 to advance the liberation and well-being of Black and brown communities.

“Colin Kaepernick and his Know Your Rights Camp is the perfect partner for Ben & Jerry’s to continue to advance our work on issues of racial justice,” said Matthew McCarthy, CEO of Ben & Jerry’s. “Ben & Jerry’s is proud to diversify our flavor portfolio by honoring Kaepernick with a full-time flavor. We deeply respect how Colin uses his voice to protest racism, white supremacy, and police violence through the belief that ‘love is at the root of our resistance.’ We have tremendous hope in what we can accomplish together.”

Since Kaepernick is a vegan, Change the Whirled is a non-dairy offering. Kaepernick’s flavor features a caramel, non-dairy sunflower butter base with fudge chips, graham cracker swirls, and chocolate cookie swirls.

Change the Whirled is exclusively available as a full-time flavor at Ben & Jerry’s Scoop Shops and on store shelves nationwide beginning in 2021 with a suggested retail price of $4.99 to $5.49. Change the Whirled will also be available to fans in Ireland, the United Kingdom, Germany, Switzerland, and the Netherlands.