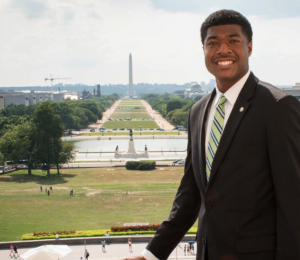 Black men and women are taking on a new position at some of the most prestigious and whitest universities across the country: student body president.

Recently,  Brown University, the Massachusetts Institute of Technology (MIT), UCLA and even the Naval Academy  have all elected Black men and women as student body presidents. Jason Carroll, the student body president of Brown, said his campaign started before the coronavirus pandemic and was motivated by President Donald Trump’s actions.

“My campaign was before COVID-19, before George Floyd,” Carroll told NBC News. “The Trump presidency has galvanized people, myself included. It’s all forced and allowed me to put things like housing conditions and general student life stuff on the back burner because that’s not the moment we’re in right now.”

Not only are these Black men and women making sure their voices are heard, but they’re bringing ideas to the table as well. Danielle Geathers became the first Black woman to be elected student body president at MIT.

One of her proposals Geathers brought to the university was to use OneUnited Bank, the nation’s largest Black-owned bank to conduct at least 10 percent of its cash deposits. Geathers’ other plans for the university include removing Columbus Day from the university calendar in favor of Indigenous Peoples’ Day. Geathers also wants MIT students to collaborate with students at Historically Black Colleges and Universities on joint projects.

Naomi Riley, the Black, female student body president of UCLA, told NBC News she ran on “Community, accountability, affordability, and accessibility” to circumvent the effects of the coronavirus pandemic on students.

Riley also said policing on campus was an issue that when brought up by Black student leaders in the past, it was dismissed or ignored. However, the Black Lives Matter protests over the summer provided an opportunity for those discussions to restart with a better understanding of how Black students felt.

“We used protests during the summer to show this problem was happening here on our campus,” Riley told NBC News. “It helped us get more meetings with the chancellor.”

Carroll, Geathers, Riley and other Black student presidents, including Barber, are now supporting each other and working together, sharing ideas to deal with issues on campus such as policing, the coronavirus, tuition and even the safety of athletes.