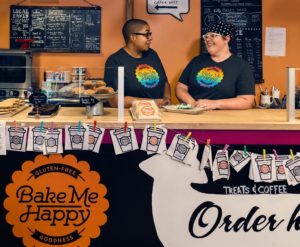 A Black-owned bakery was forced to close its shop after a number of racially charged threats targeted the business this past weekend.

The co-owner of Bake Me Happy in Columbus, Ohio, says out of an abundance of safety for her employees, the business closed its doors. The decision came after someone called in several times inquiring about the gluten-free bakery and then preceded to go on a violent and racially charged tirade, saying people need to get out of the building.

Letha Pugh, the bakery’s co-founder explained to affiliate NBC affiliate WCMH–TV, “That’s a threat, essentially,” she said. “I called the number back and the person answered the phone and just kind of went into saying a bunch of racial slurs.”

Pugh alerted police and decided to talk to the Columbus City Council. According to Black leaders, the incident is just one of several they have noticed in the area.

“It is incomprehensible that respected entrepreneurs and community activists felt it necessary to close their beloved business because of threats from an extremist racist demagogue,” Stephanie Hightower, president and CEO of the Columbus Urban League, said in a statement. “What’s just as unbelievable is that other Black business owners reportedly also are receiving similar threats. Federal, state and local authorities should immediately and thoroughly investigate these issues, protect the intended victims and ensure that swift and sure prosecution is pursued against these criminal acts.”

Hightower went on to say, “As we witnessed during the debacle in our nation’s capital last week, we should never underestimate the capacity for violence by those who appear to be the 2021 version of a lynch mob.”

Word circulated about the incident on social media, generating an outpouring of community support.

“The staff was freaked out,” Pugh said. “We’re trying to figure out what our next steps are, but I’m not into predicting what people are going to do these days. So we’re going to close it down, regroup.”

The bakery says it plans to reopen on Tuesday.