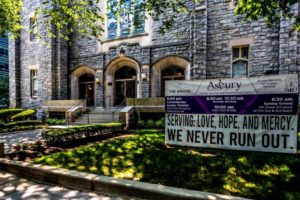 Black Lives Matter signs outside of several historic Black churches in Washington D.C. were burned and destroyed during a pro-Trump rally over the weekend.

The protest was a response to the Supreme Court tossing a Texas lawsuit pushing for the changing of election results in five swing states, Michigan, Wisconsin, Georgia, Nevada, and Pennsylvania

In a tweet on Dec. 13, D.C. Mayor Muriel Bowser said an attack on D.C. faith-based organizations is an attack on all of us.

2/ This weekend, we saw forces of hate seeking to use destruction and intimidation to tear us apart. We will not let that happen, and continue to stand together strong and United to Love.

Asbury’s senior pastor, the Rev. Lanther Mills, said in a statement the sign burning reminded him of cross-burnings that dominated the South during the days of Jim Crow.

“We are as people of faith. As horrible and disturbing as this is for us now, it doesn’t compare with the challenges and fears the men and women who started Ashbury faced 184 years ago faced,” Mills said. “So we will move forward, undaunted in our assurance that Black Lives Matter and we are obligated to continue to shout that truth. We are assured that our church is surrounded by God’s grace and mercy.”

Users on Twitter caught members of the Trump protest carrying one of the signs and burning the sign while chanting and cheering.

2/ This weekend, we saw forces of hate seeking to use destruction and intimidation to tear us apart. We will not let that happen, and continue to stand together strong and United to Love.

Multiple people were also stabbed during the event after clashing with counter-protesters. NBC Washington reported four people were stabbed and are in critical but stable condition. A man by the name of Phillip Johnson was arrested in connection to the stabbings.

Many were also quick to point out that while an abundance of police were on hand, many did nothing but stand by and watch, something that rarely happened during the Black Lives Matter protests this summer.

President and Director-counsel of the NAACP’s Legal Defense Fund, Sherrilyn Ifill, told NBC News that the Metropolitan African Methodist Episcopal Church holds a significant place in Black History. The church was the site of writer, social reformer, and abolitionist Frederick Douglass’ funeral in 1895.