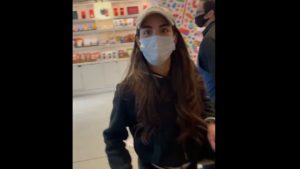 BLACK ENTERPRISE previously reported that over the weekend in New York City, a White woman falsely accused the 14-year-old son of a jazz musician of stealing her iPhone at a SoHo hotel. A portion of the skirmish was captured on video and posted to social media.

Jazz musician Keyon Harrold posted video of the incident on his Instagram account. Harrold and his son are now being represented by civil rights attorney Ben Crump, who posted a message on his Twitter account.

The parents of @KeyonHarrold Jr. and I are calling on @ManhattanDA to bring charges of assault and battery against the woman who attacked Keyon and falsely accused him of stealing her phone at @ArloHotels #ArloSoho

Join us in sending a clear message that hateful, racially motivated behavior is unacceptable. Email Manhattan DA Cy Vance Jr. and urge him to charge the woman who attacked Keyon Harrold Jr: https://t.co/yVEOt0xs5h

Crump released a statement calling for the district attorney to bring charges against the White woman for her racist actions.

“As this year of racial awareness is drawing to a close, it’s deeply troubling that incidents like this one, in which a Black child is viewed as and treated like a criminal, continue to happen. Compounding the injustice, the hotel manager defaulted to calling on 14-year-old Keyon to prove his innocence, documenting that we have two justice systems in America and that Black people are treated as guilty until proven innocent. We strongly urge Manhattan District Attorney Cy Vance Jr. to bring assault and battery charges against this woman to send the message that hateful, racially motivated behavior is unacceptable. This is what it will take to drive change. We also call for a civil rights investigation into the Arlo Hotel for its implicit bias in its treatment of Keyon.”

A petition can be signed at Justice for Keyon Harrold Jr.

This is racism. Plain and simple.

It would be horrific at any age, but it’s especially offensive that it happened to a child.

To Keyon Harrold Jr. and his family: I am so sorry this happened to you. Her behavior was an affront to our city’s values. https://t.co/xuWRyHTJmW